“There will always be war, Halvard. War is easy. It comes again and again, like waves to a shore.” 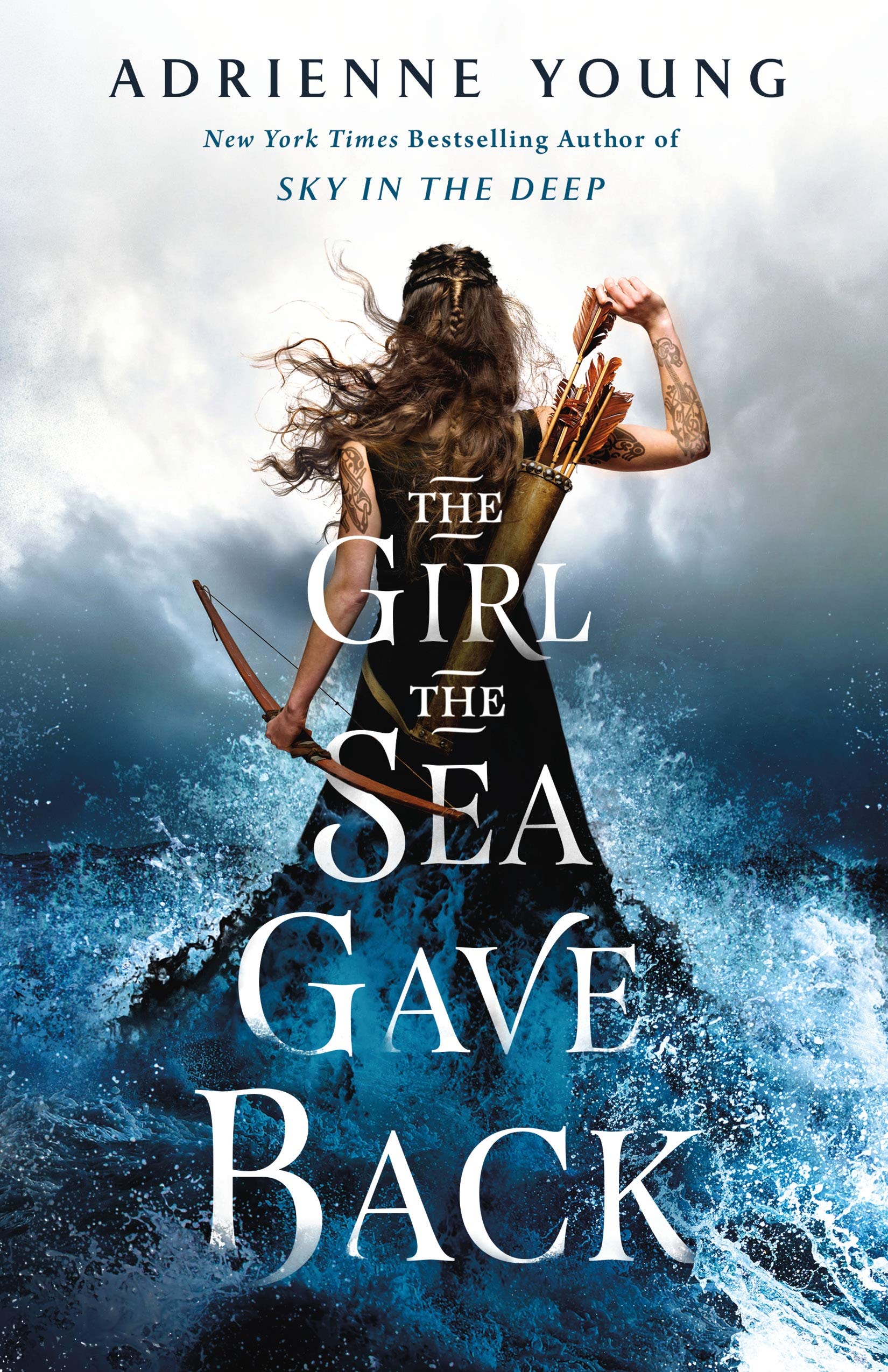 For as long as she can remember, Tova has lived among the Svell, the people who found her washed ashore as a child and use her for her gift as a Truthtongue. Her own home and clan are long-faded memories, but the sacred symbols and staves inked over every inch of her skin mark her as one who can cast the rune stones and see into the future. She has found a fragile place among those who fear her, but when two clans to the east bury their age-old blood feud and join together as one, her world is dangerously close to collapse.

For the first time in generations, the leaders of the Svell are divided. Should they maintain peace or go to war with the allied clans to protect their newfound power? And when their chieftain looks to Tova to cast the stones, she sets into motion a series of events that will not only change the landscape of the mainland forever but will give her something she believed she could never have again―a home.

Hi all! Today I’m participating in Titan’s Book Blog Tour for Adrienne Young’s THE GIRL THE SEA GAVE BACK, companion novel to SKY IN THE DEEP, an enchanting Nordic-inspired Viking-esque fantasy that’s likely to appeal to fans of the TV show Vikings (unsurprisingly).

Before leaping into the review, to whet your appetite I’ve kindly been allowed to share an excerpt from the book with you! Read on below to investigate:

I emptied the pouch into my hand and my palms pressed together around them. I closed my eyes, sitting up straight with a deep, centering breath.

The breath curled in my chest as I reached out, finding the runes in the darkness and carefully tracing their symbols with the tips of my fingers. But I needed to see them. I crawled across the floor, using a flat stone that rimmed the fire pit to push a large glowing coal onto the dirt. I rolled it before me until its light illuminated the stones just enough so that I could make them out.

Eihwaz sat in the center. The yew tree. Strength and trustworthiness. I bit down hard on my lip, my heart quickening. Dagaz was beside it, their sides touching. Dawn. An awakening. And to their right sat Pethro, the die cup and the rune of secrets.

But my gaze drifted to the corner of the spread, where one more stone was pulled up and away from the others.

Othala. The land of birth. A heritage. The story of a people.

The crunch of rocks beneath boots sounded outside and I looked up to see the shadows on the canvas moving. I frantically raked the stones together and swept them under my cot, getting to my feet as the voices grew louder.
I cursed, picking up the hot coal with my fingers and tossing it back into the fire pit with a hiss between my teeth. I pulled the furs over me just as the canvas moved and my heart slammed inside my chest as a long shadow stretched over the ground before me.
I could tell by the shape of it that it was Jorrund, his robes bundled around him. He stood in the opening of the tent silently. Maybe he’d changed his mind about what I’d said. Maybe he’d come back to apologize. But just as I was going to open my mouth and speak, he disappeared.

I let out a long breath, pinching my eyes closed against the sting on my hand where the coal had seared my skin. I rolled over, reaching beneath the cot for the rune stones and returned them to the pouch, slipping it back over my head.

It wasn’t the dark fate I’d expected to see.

But it was Eihwaz in the center. The yew tree. And the shape of it pulled a thought like thread on a spinning wheel. It was the symbol that was marked into the skin at the hollow of my throat, above the symbol of the Truthtongue.

My mouth dropped open as I remembered, my eyes going to Halvard’s axe on the ground. I sat up, reaching for it, and swallowed hard before I lifted it into the sliver of moonlight cast through the opening of the tent. I rubbed at the dried blood on the iron blade with my thumb until the shape of a branch was revealed. And not just any branch.

↠ Title: The Girl The Sea Gave Back

↠ Series Type: Companion to SKY IN THE DEEP

Thank you so much to the lovely Sarah at Titan Books for dropping me a review copy! ❤

Before we start, I’m abbreviating THE GIRL THE SEA GAVE BACK to TGTSGB and SKY IN THE DEEP to SITD for most of this review.

I think THE GIRL THE SEA GAVE BACK, before anything, is decided by how much you enjoyed SKY IN THE DEEP, and what exactly it was in SITD that you enjoyed. Because whilst I enjoyed this book, it fell into the same trap that affected SITD (in my opinion), and didn’t have as many things to help redeem it in the way SITD did.

Context: For me, what I enjoyed in SITD was the interpersonal relationships between the characters, and the world building. The criticism I had was that the novel lacked depth, and this is the same central problem I found with TGTSGB.

I actually don’t know whether this is a personal problem – did I not spend enough time in the world of the book and pay attention to the world I saw before me? Or is it because the book, at barely 300 pages, was all plot and veneer and literally nothing underneath? Because that is the sense I got, and I hate saying it. It feels like all shiny beautiful cover and mildly interesting plot.

Don’t get me wrong, I think maybe if this book was longer it could have been fascinating. Tova as a heroine really engaged me, and I think the interplay between her past and her present was fascinating. She’s got a lot of feelings about her vague past and her present treatment, but they weren’t explored enough or in depth. I didn’t know enough about those who surrounded her either, because I faltered with the lack of description and lack of personalities. Sure, they had names but I had nothing concrete to tie those names to, and I always forgot them quickly after as a result.

It’s a similar problem with Halvard, though you know a bit more about him because you are aware of the people around him, given he was a secondary character in SITD. So he was slightly better.

What was a stick-out point for me in SITD was the slow-burn relationship between Fiske and Eelyn, but there’s nothing similar in TGTSGB. Tova and Halvard are supposed to be love interests (it’s a YA so there’s no choice), but frankly little interaction, seeing each other in visions, and the last 150 pages of the book are not enough to develop a credible romantic relationship in my opinion. When they had a kiss at the end, I had little interest in it. Up until that point, they still felt like mutual acquaintances in my eyes.

Saying that, I did really enjoy learning more about the world already established in SITD! The new clans, the new gods, the Fate Spinners . . . it was all really cool. And as usual, Adrienne’s ideas are interesting and worthwhile and make good stories, even if I always pick at the lack of depth in the actual story. Her narrative voice and prose are engaging too.

Furthermore, if there is one thing to be said about the shortness of the book it is that it’s well-paced and doesn’t drag at all. The narrative streams along with no diversions to alter its course to minor subplots or quieter developments. It’s an easy, one-day read and I do appreciate that when I’m fed up with piles of epic, complex 500+ page fantasy. It makes for a wonderful break.

TL;DR: Though it lacks a certain depth and doesn’t possess some of the qualities which made SKY IN THE DEEP good, it is a quick and well-paced YA read that some may find a breather from heavier fantasy.